﻿﻿ ﻿﻿ Loss of control Accident Robinson R44 N7530R, 30 Jan 2018
Home » ASN Aviation Safety WikiBase
ASN Wikibase Occurrence # 205400
This information is added by users of ASN. Neither ASN nor the Flight Safety Foundation are responsible for the completeness or correctness of this information. If you feel this information is incomplete or incorrect, you can submit corrected information.
Tweet
Narrative:
The private pilot of the helicopter departed with three passengers on a cross-country flight in day visual meteorological conditions. Surveillance video of the takeoff showed that the helicopter assumed a nose-low attitude upon lifting off the ground and mostly maintained that attitude throughout the takeoff and initial climb. Radar data indicated that the helicopter reached a maximum altitude of 500 ft mean sea level before it entered a rapid descent and impacted homes and the ground less than 1 mile from the departure airport. The surviving passenger described the descent as "straight down."

An examination of the airframe, engine, and related systems revealed no evidence of preimpact mechanical malfunctions or failures that would have precluded normal operation. Weight and balance calculations revealed that the helicopter was operating 76 lbs over its published maximum gross weight and near the published forward center of gravity (CG) limits. The helicopter's observed nose-low attitude throughout the flight is consistent with a forward CG, which would have required additional aft cyclic control inputs to maintain level flight and may have resulted in reduced cyclic control travel. The passenger stated that the pilot did not ask any of the passengers for their weights, nor did he instruct them where to sit, suggesting that the pilot did not perform weight and balance calculations before the flight. Given the lack of mechanical anomalies, it is likely that the pilot experienced a loss of helicopter control due to his decision to operate the helicopter outside of its published weight and balance limitations.

Probable Cause: The pilot's failure to perform weight and balance calculations before departing on the flight, which resulted in his operation of the helicopter outside of its published weight and balance limitations and a subsequent loss of control shortly after takeoff. 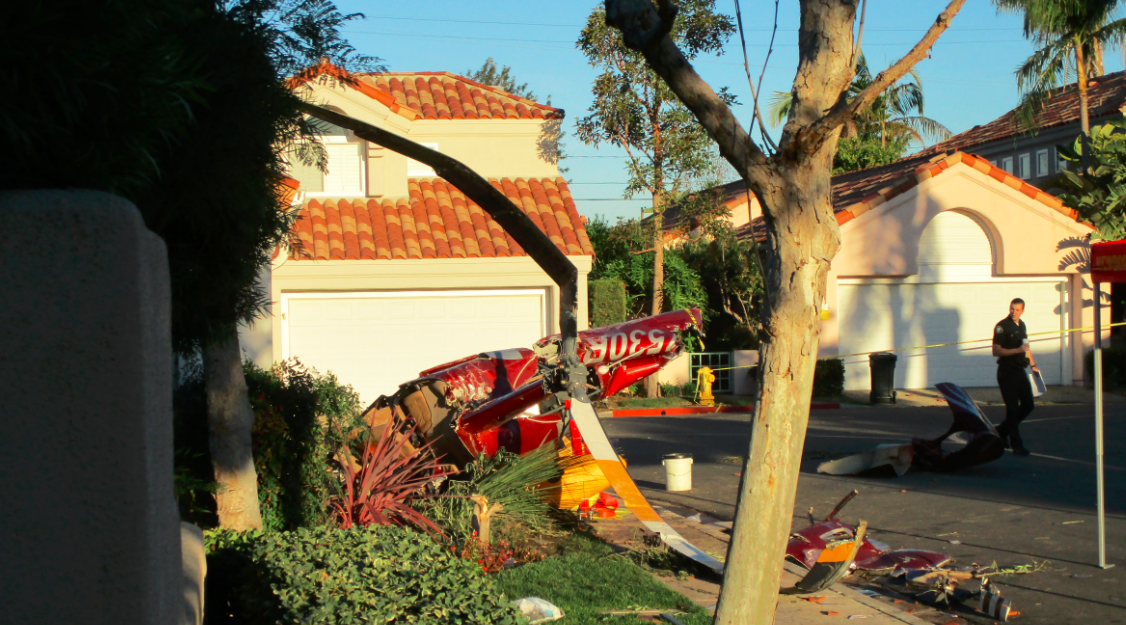 Looking NW towards the helicopter site 18 hours after impact. The helicopter roof was cut away by EMT personnel shortly after the accident. The survivor was seated in the front-left seat, and the rear right seat/headrest is visible in the image.
Revision history:
Corrections or additions? ... Edit this accident description
The Aviation Safety Network is an exclusive service provided by:
Quick Links:
CONNECT WITH US: