﻿﻿ ﻿﻿ Accident Cirrus SR22 GTS TC N404PE, 22 Aug 2019
Home » ASN Aviation Safety WikiBase
ASN Wikibase Occurrence # 228427
This information is added by users of ASN. Neither ASN nor the Flight Safety Foundation are responsible for the completeness or correctness of this information. If you feel this information is incomplete or incorrect, you can submit corrected information.
Tweet
Narrative:
The pilot stated that he obtained a thorough weather briefing that included a Convective SIGMET with embedded thunderstorms and AIRMETs for instrument flight rules conditions and icing in effect along the intended route of flight. While in cruise flight with the student pilot passenger at the flight controls, the pilot selected a heading that would take the airplane “on top of” and “between” two developing storm cells as depicted on the satellite radar imagery displayed in the cockpit. Upon entering the clouds, the airplane encountered turbulence and descended about 11,000 ft in about 36 seconds before the pilot regained control at an altitude below surrounding terrain. As the pilot increased engine power to climb above the terrain, the engine lost total power, and he deployed the airframe parachute. The airplane descended under canopy and came to rest in trees, resulting in substantial damage.

Review of weather information indicated that, before the upset, the airplane entered an area of radar echoes with reflectivities of 46.5 dBZ and likely encountered strong updrafts, severe turbulence, and severe icing associated with the thunderstorm activity. The pilot’s decision to use the airplane’s onboard satellite weather information, which has known latencies that can result in outdated data, for tactical weather avoidance resulted in the airplane encountering these conditions and the pilot’s loss of airplane control.

Examination of onboard data and the engine magnetos revealed that the engine experienced an overspeed during the uncontrolled descent, which resulted in the catastrophic failure of both magnetos and the subsequent total loss of engine power.

Probable Cause: The pilot’s reliance on latent satellite weather imagery for tactical weather avoidance, which resulted in flight into thunderstorms and a loss of control. Also causal was an engine overspeed during the uncontrolled descent, which resulted in catastrophic damage to the magnetos and a total loss of engine power. 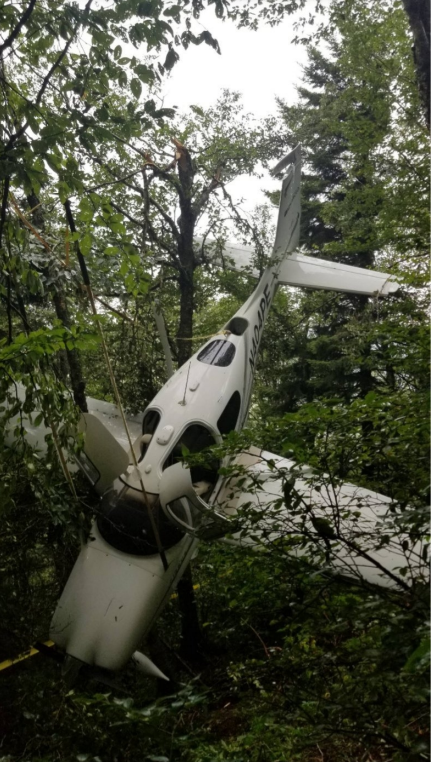