﻿﻿ ﻿﻿ Accident Cirrus SR22 N150X, 17 Mar 2020
Home » ASN Aviation Safety WikiBase
ASN Wikibase Occurrence # 234115
This information is added by users of ASN. Neither ASN nor the Flight Safety Foundation are responsible for the completeness or correctness of this information. If you feel this information is incomplete or incorrect, you can submit corrected information.
Tweet
Narrative:
On March 17, 2020, about 1545 eastern daylight time, a Cirrus SR22, N150X, was substantially damaged when it was involved in an accident near Conway, South Carolina. The private pilot was not injured. The airplane was operated as a Title 14 Code of Federal Regulations Part 91 personal flight.

The pilot was on a cross-country, instrument flight rules flight, and while en route to the destination airport, he diverted to an alternate airport with a higher ceiling. The flight was operating in instrument meteorological conditions and was vectored by the controller to the initial approach fix (IAF) for an instrument landing system approach. The pilot was instructed to cross the IAF at or above 2,000 ft mean sea level (msl); however, with the vertical speed mode of the autopilot off the airplane did not descend much below 3,000 ft pressure altitude as it approached the IAF.

When the flight was less than 2 miles from the IAF, an autopilot course capture with a corresponding heading change to the left occurred. Over the next 25 seconds, with the autopilot altitude bug set at 2,000 ft msl, which was 1,000 ft below the airplane’s current altitude, the autopilot vertical speed mode engaged, and the autopilot vertical speed bug set initially to 500 fpm descent and then subsequently to greater than 750 fpm descent, the airplane climbed less than 10 ft over the course of 4 seconds then began slowly descending, with pitch trim-in-motion occurring numerous time over the course of 15 seconds. The slight increase in altitude initially was likely due to environmental conditions since the airplane then began to descend at a rate of about -1,000 feet-per-minute. The delay in descending was likely the result of the increased start up voltage of the pitch servo. As the airplane neared the IAF, a waypoint change from the IAF to the original destination airport occurred. It is likely that this erroneous waypoint change was the result of pilot input. The airplane flew through the localizer course, and as it passed outside of the outer edge of the localizer, the autopilot turned off. The pilot could not recall turning the autopilot off, and the reason for the autopilot turning off could not be determined from the available evidence.

Over the next minute, a series of altitude excursions occurred during which the airplane repeatedly climbed and descended. During this time, the controller advised the pilot that he had flown through the localizer, and the pilot advised the controller that he was aborting the procedure. The pilot reported that when he added power, he had difficulty maintaining control of the airplane and that it was unstable. Subsequently, the pilot sensed that he was fighting the airplane and in an unusual attitude, with the pitch trim near full nose-down position and the airplane in a corresponding -42° nose-low and 13° left-roll attitude, he deployed the airframe’s parachute system. The airplane descended under canopy and touched down in the backyard of a house. The airplane's nose gear collapsed and the rudder partially separated during the landing, resulting in substantial damage to the airframe.

Postaccident operational testing of the autopilot components revealed a slight malfunction of the pitch servo that would have resulted in a small delay in the servo reacting to commands from the computer; the delay would have potentially resulted in small pitch oscillations of about 1° to 2°. However, these low magnitude pitch oscillations would likely have presented no flight hazard. No significant discrepancies were noted during testing of the remaining autopilot components. Therefore, it is likely that the pilot manually changed course when near the IAF and then intentionally applied control pressure on the control yoke for longer than 3 seconds with the vertical speed mode engaged. Those actions resulted in a heading change, altitude excursions, and the subsequent departure from controlled flight.

Probable Cause: The pilot’s incorrect use of the autopilot while approaching the initial approach fix and his subsequent improper primary pitch control input while a pitch mode of the autopilot was engaged, which resulted in pitch excursions and subsequent departure from controlled flight.

At 3:56 p.m., Horry County Fire Rescue crews were dispatched to Highway 472 and Gunsmoke Trail for a reported small aircraft crash.

A smaller aircraft made an emergency landing into a field in a which the parachute was deployed. 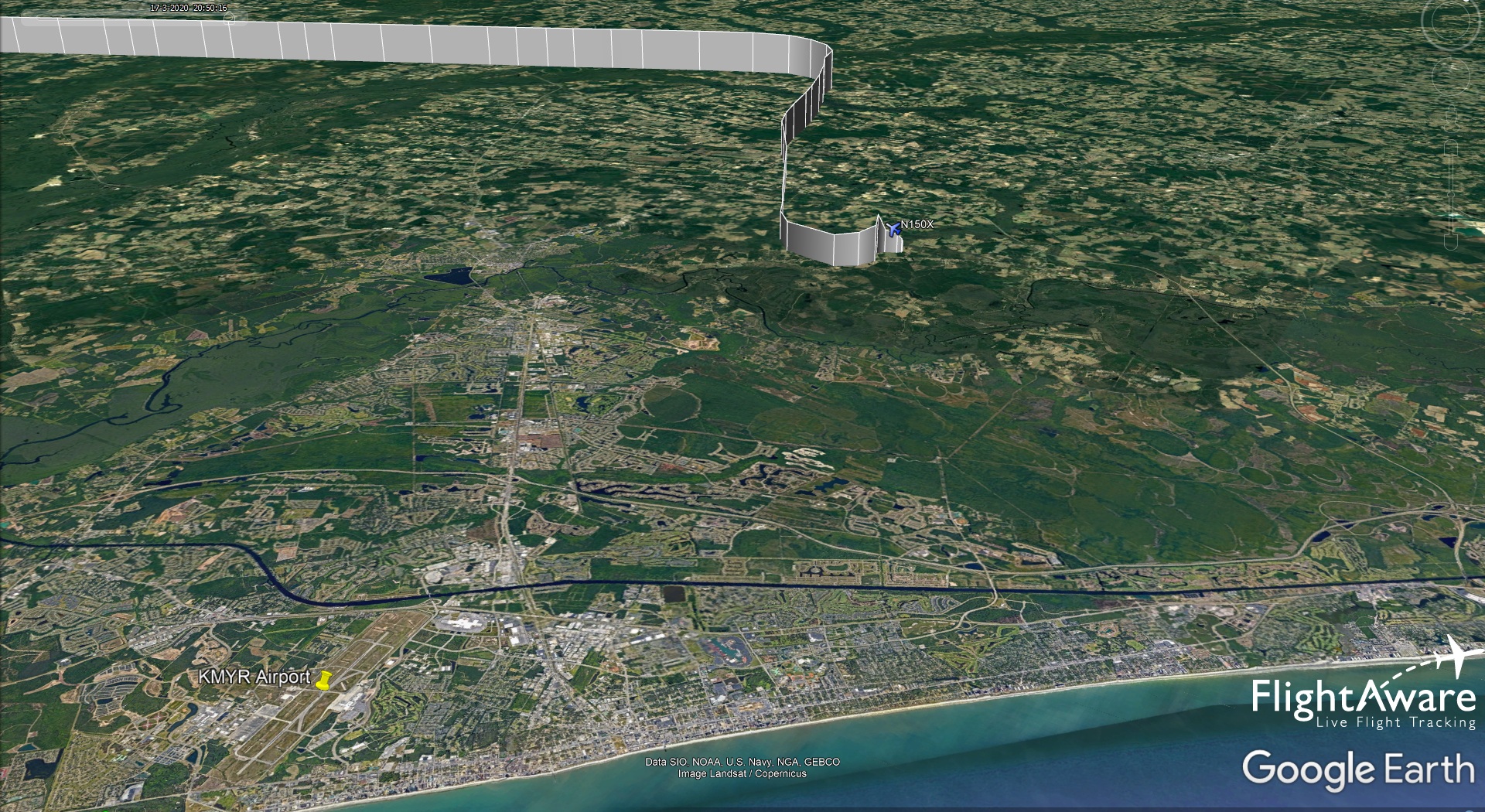 The Aviation Safety Network is an exclusive service provided by:
Quick Links:
CONNECT WITH US: